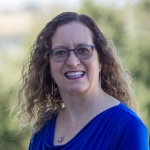 Annemarie Mountz is director of communications in the College of Education at Penn State. She also is an instructor for the college's First-Year Seminar.

She earned her B.A. in journalism at Penn State in 1984 and her M.Ed. in Higher Education Administration in the Penn State College of Education Department of Education Policy Studies in 2019.

Before joining the college in her current role, she spent nearly 20 years in News and Media Relations in Penn State's Office of Strategic Communications, most recently serving as assistant director. In that role she served as an official spokesperson for the University and was a member of the crisis communications team, among other duties.

She also was an Administrative Fellow in 2012-13, under Craig Weidemann (Outreach) and Damon Sims (Student Affairs).

Before joining Penn State, she worked in the sports, news and features departments at the Centre Daily Times newspaper in State College, Pa. She also has worked in radio, and as a newspaper staff photographer in New Jersey.