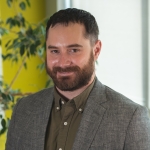 Matthew Gardner Kelly (he/him/his) is an assistant professor in the Educational Leadership Program. He received his M.A. (history) and Ph.D. (history of education and educational policy) from Stanford University, where he also was the Yu-Ly Interdisciplinary Graduate Fellow from 2015-2018.

A historian of education and policy analyst, Kelly examines the intersections of education funding policies and inequities of race, ethnicity, income, and residence. With support from the National Academy of Education and Spencer Foundation, Kelly is currently finishing his first book, tentatively titled Dividing the Public: School Finance and the (Re)Creation of Structural Inequality. The book uses the history of the district property tax, and its alternatives, to trace the role of education finance policies in expanding and entrenching structural inequalities in education in the 19th and 20th centuries.

Kelly’s research has received awards from Division F of the American Educational Research Association and the History of Education Society. He was named a distinguished research and practice fellow by the National Education Finance Academy in 2021. His research has appeared in various academic journals, including AERA Open, Educational Researcher, History of Education Quarterly, and Teachers College Record. His writing also has appeared in popular media outlets, including Slate, The Philadelphia Inquirer, and San Francisco Chronicle/SFGate. He currently is a senior associate editor and book review co-editor for the American Journal of Education, an officer for AERA’s Division F, and a member of the Board of Trustees and Board of Advisors for the National Education Finance Academy.

Kelly is an expert in Pennsylvania education funding policies. He was a 2018-19 Pennsylvania Education Policy Fellow through the Institute for Educational Leadership, has advised state legislators on school funding formulas, and is an expert witness in an ongoing constitutional challenge to Pennsylvania’s school funding system. He teaches courses in school finance and educational leadership. He advises D.Ed. and Ph.D. students interested in the history of education, school finance, or long-term trends in educational policy in the United States.