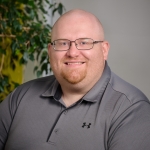 Brian Cox is a marketing communications specialist in the College of Education at Penn State, joining the staff in July 2022. He earned his B.A. in communication media from Lock Haven University’s College of Liberal Arts and Education in 2007.

Before coming to Penn State, he spent nearly 15 years at The Sentinel, a daily newspaper in Lewistown, for the final five-plus years as managing editor. Before that, he served as assistant managing editor, night editor, page designer, and sports reporter. His first professional work was as a sports reporter for The Express newspaper in Lock Haven.

In his spare time, he volunteers with his children’s teams and clubs and serves as a youth baseball umpire. A native of Mount Union, he resides in McVeytown with his wife and three children. His younger brother, Eric, also works for Penn State as an HR consultant for Auxiliary and Business Services on the University Park campus.