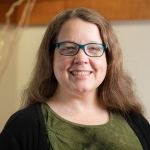 Julia Plummer spent more than a decade teaching children and adults in planetariums and other informal settings and continues to teach college-level introductory astronomy and science methods for preservice elementary teachers. Her research interests focus on the design of learning environments that support children's spatial thinking and science practices in the domain of astronomy. This includes investigating both formal environments, such as classrooms, and informal environments, such as planetariums and museums.  Her research has led to the development of astronomy learning progressions focused on explaining celestial motion phenomena and connecting observations of the current Solar System to its formation model.  Dr. Plummer has co-authored middle school astronomy curricula and collaborated on the development of planetarium programs for children.  Dr. Plummer received a combined Ph.D. in Astronomy & Education from the University of Michigan.