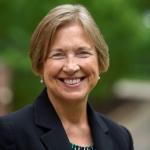 Dr. Bieschke is Penn State's vice provost for faculty affairs. She started her Penn State Career in 1991, joining the College of Education as assistant professor of counseling psychology. She became full professor in 2007. She served as the director of the CEDAR (now Herr) Clinic from 2003-2011, and served intermittently for nine years as director of clinical training for the APA-accredited counseling psychology program. In 2012 she accepted a one-year Administrative Fellowship with Interim Executive Vice President and Provost Rob Pangborn. She then returned to the College of Education to serve as head of the Department of Educational Psychology, Counseling, and Special Education for the next three years. In 2016, she was appointed interim dean of the Schreyer Honors College. In 2017, Bieschke accepted her current position of vice provost for faculty affairs.