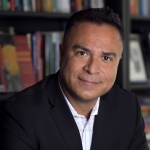 Endowed Professor of Education at the Pennsylvania State University. Prior to Penn State, Dr. Conchas was Professor of Educational Policy and Social Context at the University of California, Irvine, Assistant Professor at the Harvard Graduate School of Education, and Senior Program Officer for the Bill & Melinda Gates Foundation. Conchas is an expert on qualitative research methods, with a particular focus on case study methodology. Conchas’ research focuses on inequality with an emphasis on urban communities and schools. Numerous scholarly journals have published his work. He is the author of nine books, including The Color of Success: Race and High-Achieving Urban Youth, Small Schools and Urban Youth: Using the Power of School Culture to Engage Youth, StreetSmart SchoolSmart: Urban Poverty and the Education of Boys of Color, and Cracks in the Schoolyard—Confronting Latino Educational Inequality. His current coauthored book, The Chicana/o/x Dream: Hope, Resistance, and Educational Success, was conferred the 2021 Book-of-the-Year Award from the American Association of Hispanics in Higher Education (AAHHE).

Gil Conchas was born to José and Evelia Conchas, Mexican immigrants from San Jerónimo, a small farming town in the state of Jalisco. Their third son, Gil, has two older brothers, one younger brother, and a sister, the youngest. Married in México, José and Evelia already had two sons when the elder José applied in 1966 to be a guest worker for the United States Bracero program, which legally allowed for temporary importation of Mexican contract laborers. Leaving his wife and two children behind, he traveled alone for 3 years, throughout the Southwest, picking strawberries, tomatoes and grapes. In 1969, Evelia and her two children left México and joined Jose in southeast San Diego, to a predominately African-American neighborhood near Logan Heights, where they lived through Gil’s kindergarten year. Gil’s family history has influenced his uniquely established insights on social justice and, in particular, the success of all youth and young adults who face tremendous odds.

Gil Conchas’ collective work seeks not to be reactive when dealing with efforts to deal with social inequality impacting low-income communities. Instead, he looks to solutions that eradicate the roots of the social problems facing the most marginalized. Such research efforts are not accomplished in isolation—they require scholarship that has influence in the academy and beyond. In partnership with community entities, he addresses the challenges of low-income communities and the populations they serve. Gil seeks solutions within various social contexts—in and out of the school setting— where he highlights his perspectives on the factors and influences that structure success instead of failure. Conchas has been a Visiting Professor at the University of Southern California, San Francisco State University, University of Washington, University of Barcelona, Spain, and the University of California, Santa Barbara and Berkeley.